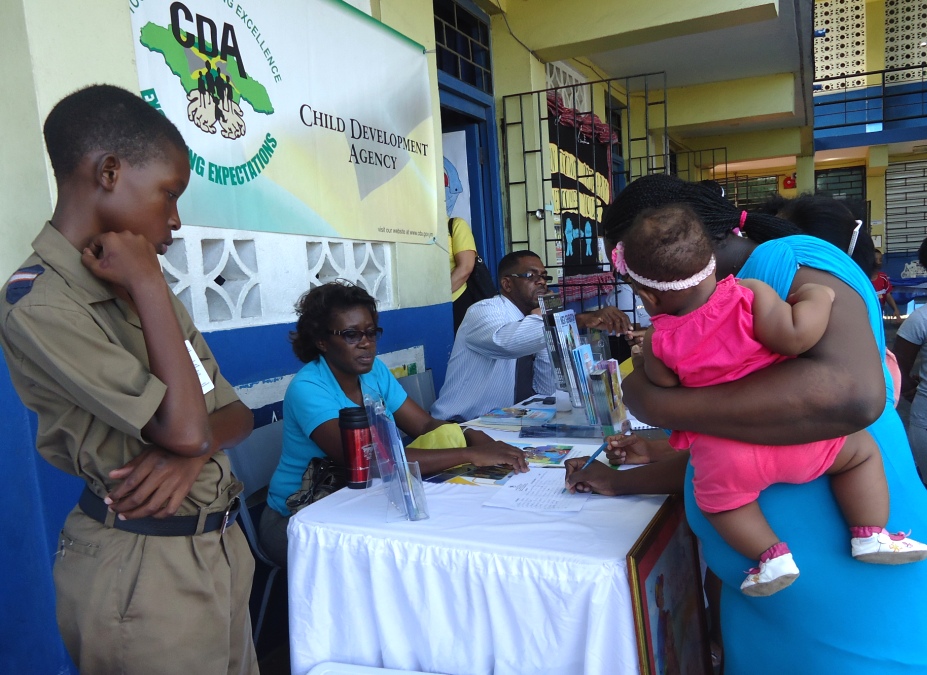 Acting CEO of the Child Development Agency (CDA) Rosalee Gage-Grey has disclosed that the Agency has intensified its intervention in communities to guide persons in becoming more effective parents.

The Acting CEO was speaking at the Child Development Agency’s (CDA) “Every Child is My Child” Community Forum and Expo at the Allman Town Primary School in the Central Kingston community recently.   The event was held under the theme: “Parenting for Positive Change in Jamaica.”

Since 2012, the Agency’s Children and Family Support Units (CFSU) in its South East Regional Office (Kingston and St. Andrew, St. Catherine and St. Thomas) and the Western Region (St. James; Westmoreland; Trelawny and Hanover) have conducted some 121 parenting workshops combined, impacting over 1485 parents.  The Agency also conducts monthly parenting workshops at its North East and Southern regional offices, and carries out interventions through its 14 parish offices.

Underscoring the power of positive parenting in transforming the lives of children, Mrs. Gage-Grey noted: “It is often said that the hand that rocks the cradle, rules the world and we know that positive parenting not only transforms homes, but impacts communities and entire countries.”

She explained that through CDA’s  community meetings across the Island, at its intake desk, and from investigating cases forwarded by the Office of the Children’s Registry (OCR), the Agency’s officers have concluded that a key factor impacting the care and protection of children and many of the other social issues in the country, was the need for more effective parenting.

“From these situations we realize that there is need to equip parents with the requisite skills to enable them to provide a nurturing and stable environment for their children, and also recognise the importance of parents having the support of the extended family and the wider community in their role as parents ,” Mrs. Gage-Grey said.

Mrs. Gage-Grey added: “Through the various avenues, the Agency provides family counseling and conducts parenting workshops to impart to parents, proper techniques and coping skills in raising their children.  The Agency also partners with other organizations such as PATH, Food for the Poor and others to connect families with various forms of economic support, because we know that in many cases, parents want to provide for their children, and with a little support they can do so.”

In her comments, Minister of Youth and Culture the Hon. Lisa Hanna reiterated her call for parents to take greater responsibility for their children, especially as it related to monitoring their interactions on social media.

“I urge parents to be vigilant; know what they are doing online especially on social media platforms like Facebook, Skype and others,” the Minister said.

Observing that pornographic sites were the number one online spaces visited around the world, the Minister noted that children, the world over, had easy access to these sites and hence the need for parents to continuously monitor their activities.

Minister of Education the Hon. Rev. Ronald Thwaites urged fathers to get involved in the lives of their children: “Even if you do not have what to give them, your presence is important,” the Minister said.

A number of presentations were also made to the parents at the meeting. Regional Director of CDA’s South East Region Robert Williams highlighted some of the major issues surrounding parenting in Jamaica, and solutions. Mr. Williams underscored the importance of parents taking steps to provide for their children’s basic needs; properly supervising their children, and fostering a trusting relationship with them.

Head of CDA’s South East Region’s Children and Family Support Unit (CFSU) Jean Duhaney, guided persons through the role and function of the Unit which was established to provide counseling and other forms of intervention to vulnerable children and their parents. Don Dobson of the Broadcasting Commission guided the group through the Commission’s television rating system.

A panel discussion followed, featuring Registrar of the Office of the Children’s Registry Grieg Smith; Representatives of the Centre for the Investigation of Sexual Offences and Child Abuse (CISOCA), and others.

Principal of the Allman Town Primary Mrs. Kandi-Lee Crooks-Smith and Director of Children and Family Programmes at the CDA Audrey Budhi chaired the programme. PTA President Pauline Salmon also addressed the group, while performances were done by students Jo-Nathan Smith who did a drumming piece and Drama Ink that delivered a drama presentation on child labour.